Owners Elizabeth and Dan Mueller are a husband and wife team. Dan grew up in River Vale, NJ and started dancing at AEDE at seven years old through 18 when he went off to college to earn a Bachelor of Fine Arts in Dance. After his degree completion, Dan joined the staff at AEDE as a teacher, choreographer, and Associate Competition Director. He also spent time dancing professionally with Freespace Dance Company and traveled throughout the country and to Europe with them to perform. Elizabeth was a high school English teacher for 13 years and has brought her knowledge and understanding of children and her compassion for students to AEDE. Dan and Liz are high school sweethearts and Liz fondly recalls surprising Dan after class at AEDE with cupcakes on his 16th Birthday. Dan and Liz have always been a great team, and they are so proud to be the owners of a place that many students describe as their “second home.” They, along with their staff of professionals, provide a nurturing environment that guides performers to achieve their absolute best. They are both honored and privileged to continue building the legacy that Anita and Frank started over 33 years ago. 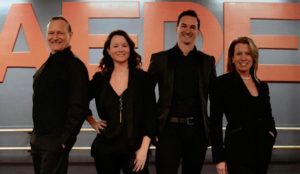 Co-founder Anita Ehrler has been actively associated with the dance world as a student, a professional dancer. and a teacher for over 30 years. As a child growing up in Florida, Ms. Ehrler was trained under the tutelage of Joan Miller of the Palm Beach Ballet and Cuban Ballerina Cuka Martinez, as well as performing with the David Wright Dance Company of Miami. Upon moving to New York at age 17, Anita received a scholarship to the Harkness Ballet School. Shortly thereafter she joined Ronn Forella's Second Century Dance Company, performing at City Center, Lincoln Center and the Delacorte Theatre.

Switching gears to Broadway, Anita appeared in Bob Fosse's Dancin' and Chicago, and Jerry Herman's "Jerry's Girls. In films and TV Anita can be seen in "Annie", "A Chorus Line", The Guiding Light, Night of a Hundred Stars and numerous Miss America Pageants, as well as commercials for MacDonalds, Dr. Pepper and Chevrolet.

Anita was the star of the award winning Pert Shampoo commercials in Canada and London. As an assistant/associate choreographer she worked on numerous projects with her mentor Ronn Forella, including Liza Minelli's National Concert Tour. She has toured the country teaching for Dance Olympus, Danny Hoctor's Dance Caravan, and Dance Masters of America. Anita is proud of her work on the Dance Extensions production of the teen television show "Talent Exchange".

Co-founder Frank Mastrocola began his career at age 12 as a musician and singer in a local rock band in Syosset, Long Island. He was introduced to the worlds of theatre and dance in high school by one of his teachers. Furthering his studies, he attended the Boston Conservatory of Music, and as a dance major.

His first professional appearance was with Rudolf Nureyev and the Boston Ballet in the Boston Music Hall. His professional career has taken him from Las Vegas and the London Palladium with Chita Rivera, to Broadway with Liza Minelli, Bob Fosse, Michael Bennett, Trevor Nunn and Andrew Loyd Weber, and to films with Sir Richard Attenborough, Ben Vereen, William Katt and Martha Ray. Frank's Broadway credits include Bob Fosse's 'Dancin', the original companies of Dream Girls, The Rink, Big Deal, Starlight Express and the workshop/creation of 'Smokey Joe's Cafe'.

His final and most memorable role on Broadway was 4 years at the Wintergarden Theatre as the sexy "Rum Tum Tugger" in the longest running musical in Broadway history, "Cats", appearing in the role longer than any other actor who played the part.His film and TV credits include A Chorus Line and Pippin, Live with Regis and Kathi Lee, and the Guiding Light.